Sixty years ago this day, on March 1, 1954, the United States conducted its first hydrogen bomb test at the Bikini atoll in the Pacific. It was the largest US nuclear explosion ever with a yield of 15 megatons of TNT. The blast was much more powerful than predicted and led to massive radioactive contamination.

Sixty years have passed since the United States carried out a hydrogen bomb test on Bikini Atoll in the Pacific on March 1, 1954.

Memories of the exposure of the crew of the Daigo Fukuryu Maru, a Japanese tuna fishing boat, to radiation from the blast have faded over time. But the legacy of the incident is, by no means, a thing of the past. The 60th anniversary of the tragedy of the Daigo Fukuryu Maru should serve as a fresh reminder of the horrible damage that nuclear energy could cause, regardless of whether it is used for military or civilian purposes.

The hydrogen bomb, 1,000 times more powerful than the atomic bomb dropped on Hiroshima, produced a tremendous amount of deadly radioactive fallout. The test and its serious consequences made people around the world painfully aware of the frightening possibility of the nuclear arms race, led by the United States and the Soviet Union, escalating into an apocalyptic event, causing the annihilation of mankind.

The “radioactive tuna” and the rain containing lethal fallout produced by the test sent shock waves throughout Japan. The Daigo Fukuryu Maru incident triggered a movement against atomic and hydrogen bombs and renewed heightened public awareness about victims of the atomic bombings of Hiroshima and Nagasaki.

But the March 1, 1954, hydrogen bomb test was just one of more than 500 nuclear tests that had been carried out in the atmosphere by 1980.

A recently discovered U.S. official document showed that the U.S. government had set up 122 stations around the globe to monitor the radioactive fallout from the hydrogen bomb test. The objective of these facilities was to estimate the degree of pollution caused to the Earth by the test. We cannot help but wonder how much serious effort was actually made to limit the negative effects of the test on human health. 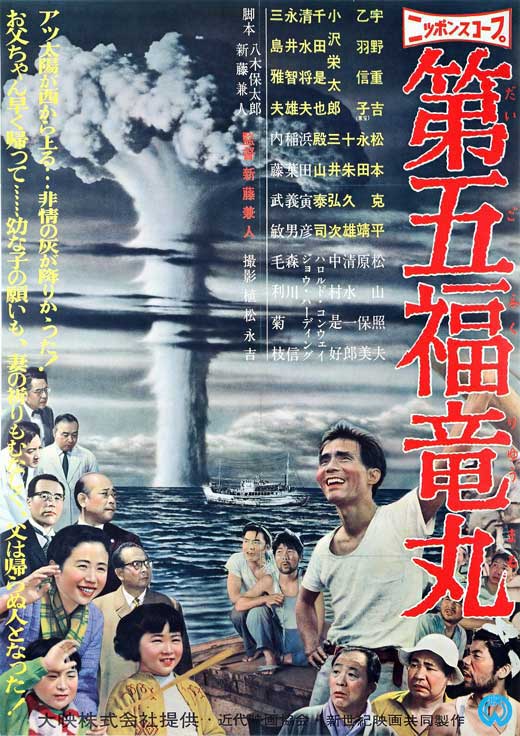 Bikini islanders were forced to leave their hometowns. More than six decades later, they still cannot return there. Many local residents living around other former test sites in various parts of the world are also complaining of health problems. But the world’s nuclear powers have generally been unsympathetic to such complaints.

Under the pretext that nuclear weapons are vital for national security, many people have been forced to endure suffering and misery. This fact inevitably reminds us that nuclear arms are, by their nature, inhuman.

Ten months after the test on Bikini Atoll, the United States agreed to pay more than 700 million yen to Japan. But the money was paid as “sympathy money,” because the U.S. government refused to admit its responsibility for a compensation payment.

When six nuclear tests were conducted between March and May 1954 on Bikini Atoll, a total of 1,000 Japanese boats and ships are also estimated to have been sailing in nearby waters. Compensation, however, was paid only for part of the damage caused by the testing to fishing in the area. Former crew members of these vessels, who suspect that they are suffering from health problems caused by exposure to radiation from the tests, along with interested researchers, are demanding efforts to address their concerns. But the Japanese government has not made a serious response to their demands, treating the issue as something that has been concluded.

However, official documents that have been declassified in recent years revealed behind-the-scenes diplomatic maneuverings by the United States to quickly resolve the matter. Concerned about a possible surge of anti-U.S. sentiment among the Japanese public, Washington, for example, applied pressure on Japan to halt an investigation into contaminated tuna.

If nuclear energy were to get out of control, people and society would suffer immeasurable damage. Trying to hide the reality as much as possible seems to be a natural propensity of those who utilize nuclear energy, either through weapons or through power plants.

Let us take a fresh, hard look at what occurred at Bikini Atoll six decades ago. In thinking about man’s relationship with nuclear power, it is essential to examine the facts about the test and uncover details about the damage it caused, one by one.