I due Churchill: contro i fascismi ma per il colonialismo

Winston Churchill is remembered for leading Britain through her finest hour — but what if he also led the country through her most shameful one? What if, in addition to rousing a nation to save the world from the Nazis, he fought for a raw white supremacy and a concentration camp network of his own? This question burns through Richard Toye’s superb, unsettling new history, “Churchill’s Empire” — and is even seeping into the Oval Office.

George W. Bush left a big growling bust of Churchill near his desk in the White House, in an attempt to associate himself with Churchill’s heroic stand against fascism. Barack Obama had it returned to Britain. It’s not hard to guess why: his Kenyan grandfather, Hussein Onyango Obama, was imprisoned without trial for two years and tortured on Churchill’s watch, for resisting Churchill’s empire.

Can these clashing Churchills be reconciled? Do we live, at the same time, in the world he helped to save and the world he helped to trash? Toye, one of Britain’s smartest young historians, has tried to pick through these questions dispassionately. Churchill was born in 1874 into a Britain that was coloring the map imperial pink, at the cost of washing distant nations blood-red. He was told a simple story: the superior white man was conquering the primitive dark-skinned natives, and bringing them the benefits of civilization.

As soon as he could, Churchill charged off to take his part in “a lot of jolly little wars against barbarous peoples.” In the Swat valley, now part of Pakistan, he experienced, fleetingly, an instant of doubt. He realized that the local population was fighting back because of “the presence of British troops in lands the local people considered their own,” just as Britain would if she were invaded. But Churchill soon suppressed this thought, deciding instead that they were merely deranged jihadists whose violence was explained by a “strong aboriginal propensity to kill.”

He gladly took part in raids that laid waste to whole valleys, writing: “We proceeded systematically, village by village, and we destroyed the houses, filled up the wells, blew down the towers, cut down the shady trees, burned the crops and broke the reservoirs in punitive devastation.” He then sped off to help reconquer the Sudan, where he bragged that he personally shot at least three “savages.”

The young Churchill charged through imperial atrocities, defending each in turn. When the first concentration camps were built in South Africa, he said they produced “the minimum of suffering” possible. At least 115,000 people were swept into them and 14,000 died, but he wrote only of his “irritation that kaffirs should be allowed to fire on white men.” Later, he boasted of his experiences. “That was before war degenerated,” he said. “It was great fun galloping about.” 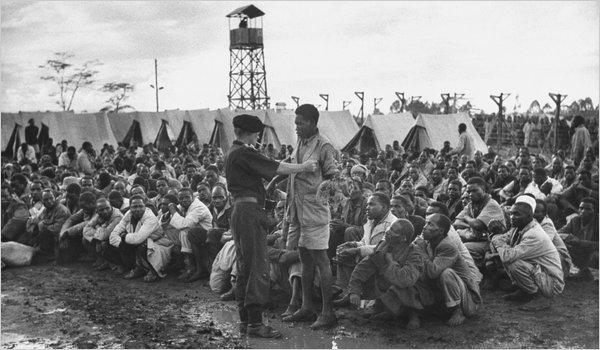 After being elected to Parliament in 1900, he demanded a rolling program of more conquests, based on his belief that “the Aryan stock is bound to triumph.” As war secretary and then colonial secretary in the 1920s, he unleashed the notorious Black and Tans on Ireland’s Catholics, to burn homes and beat civilians. When the Kurds rebelled against British rule in Iraq, he said: “I am strongly in favor of using poisoned gas against uncivilized tribes.” It “would spread a lively terror.” (Strangely, Toye doesn’t quote this.)

Of course, it’s easy to dismiss any criticism of these actions as anachronistic. Didn’t everybody in Britain think that way then? One of the most striking findings of Toye’s research is that they really didn’t: even at the time, Churchill was seen as standing at the most brutal and brutish end of the British imperialist spectrum. This was clearest in his attitude to India. When Gandhi began his campaign of peaceful resistance, Churchill raged that he “ought to be lain bound hand and foot at the gates of Delhi and then trampled on by an enormous elephant with the new Viceroy seated on its back.” He later added: “I hate Indians. They are a beastly people with a beastly religion.”

This hatred killed. In 1943, to give just one example, a famine broke out in Bengal, caused, as the Nobel Prize-winning economist Amartya Sen has proven, by British mismanagement. To the horror of many of his colleagues, Churchill raged that it was their own fault for “breeding like rabbits” and refused to offer any aid for months while hundreds of thousands died.

Hussein Onyango Obama is unusual among Churchill’s victims only in one respect: his story has been rescued from the slipstream of history. Churchill believed the highlands, the most fertile land in Kenya, should be the sole preserve of the white settlers, and approved of the clearing out of the local “kaffirs.” When the Kikuyu rebelled under Churchill’s postwar premiership, some 150,000 of them were forced at gunpoint into detention camps, later called “Britain’s gulag” by the historian Caroline Elkins. Obama never truly recovered from the torture he endured.

This is a real Churchill, and a dark one — but it is not the only Churchill. He also saw the Nazi threat far ahead of the complacent British establishment, and his extraordinary leadership may have been the decisive factor in vanquishing Hitlerism from Europe. Toye is no Nicholson Baker, the appalling pseudo historian whose recent work “Human Smoke”presented Churchill as no different from Hitler. Toye sees all this, clearly and emphatically.

So how can the two Churchills be reconciled? Was his moral opposition to Nazism a charade, masking the fact that he was merely trying to defend the British Empire from a rival? Toye quotes Richard B. Moore, an American civil rights leader, who said that it was “a most rare and fortunate coincidence” that at that moment “the vital interests of the British Empire” coincided “with those of the great overwhelming majority of mankind.” But this might be too soft in its praise. If Churchill had been interested only in saving the empire, he could probably have cut a deal with Hitler. No: he had a deeper repugnance to Nazism than that. He may have been a thug, but he knew a greater thug when he saw one — and we may owe our freedom today to this wrinkle in history.

This is the great, enduring paradox of Churchill’s life. In leading the charge against Nazism, he produced some of the richest prose poetry in defense of freedom and democracy ever written. It was a check he didn’t want black or Asian people to cash, but as the Ghanaian nationalist Kwame Nkrumah wrote, “all the fair brave words spoken about freedom that had been broadcast to the four corners of the earth took seed and grew where they had not been intended.” Churchill lived to see democrats across Britain’s imperial conquests use his own hope-songs of freedom against him.

In the end, the words of the great and glorious Churchill who resisted dictatorship overwhelmed the works of the cruel and cramped Churchill who tried to impose it on the world’s people of color. Toye teases out these ambiguities beautifully. The fact that we now live at a time where a free and independent India is an emerging superpower in the process of eclipsing Britain, and a grandson of the Kikuyu “savages” is the most powerful man in the world, is a repudiation of Churchill at his ugliest — and a sweet, unsought victory for Churchill at his best.